What would you do if you suddenly found yourself transported to a parallel universe where everything was different? You have a different home, different job and instead of being single, you discover you are actually married to a sexy tall American guy who shares all your kinky preferences?

To be honest I would probably behave exactly the same as Penny West, the heroine of Vanessa Brooks' Claimed by Daddy when this happens to her: whirling through a merry-go-round of emotions including incredulity, fear, panic and - what with the sexy 'new' husband - lustful abandonment.

Given such an outlandish premise, it's really rather relatable.

The book starts with Penny flying back from New York to London. The plane is caught in turbulence, she blacks out and then suddenly everything has changed. Well, not everything. She is still herself. Her face is the same, her family history is (almost) the same but suddenly she is in the middle of a life that she has no memory of.

Time slips are a tricky business. To everyone around her, Penny's story seems wildly implausible. To everyone else, including her husband, she looks like the same person doing the same thing as she always done. But to Penny, it must feel like starting a movie halfway though with no memory of how the first half went.


Finding yourself a sexy husband who likes to practise Domestic Discipline and calls himself Daddy has its benefits, that's for sure. David, the books hero, is pretty damned perfect, make no mistake about it. But it's hard for Penny to get onboard with the situation when she not only has no memories of meeting and marrying him but also has her own perfectly clear memories of living a completely different life during that time period.

Luckily Penny has the support and acceptance of not only David, but also her sister, her sister's partner and her Dad (who is actually dead in her own timeline). Once they are onboard, it becomes possible for Penny to accept her situation and focus on adjusting to her new reality.

And it's a pretty amazing alternative reality that she finds herself in. She and David are clearly not short of a few quid, they run a successful business together and own a fancy house in an expensive part of London. Alternative-Reality Penny has the Submissive/Little lifestyle that Protagonist Penny had only ever dreamed of. She has her own special playspace and everything that a Little could wish for. And she has a husband who absolutely adores her.

Except there's the problem. David adores his Penny. The one he married, the one with whom he has five years of shared history. Can he accept this interloper who doesn't know anything about it, has no recollection of their wedding day, their favourite restaurants, their shared experiences and their in-jokes?

Can Penny allow herself to love David knowing that simultaneously she both is and isn't the woman he loves?

Well, happily, they have a jolly lovely time of it finding out. The sex and spanking scenes in this book are absolutely delicious. Poor David has to adjust to a role which is outside any expectations that he might have had when he signed up for life as a Daddy Dom. That of negotiating a relationship with a woman who is both the person he knows both inside and out and who is also, in every meaningful way, a complete stranger that he needs to woo all over again. Given that Penny is physically exactly the same as his Penny, it does make it a lot more straightforward for him to give her the most earth shatteringly amazing orgasm that she has ever experienced. He literally knows which buttons to press.

They don't just stop at the one earth shattering orgasm obviously. There's lots of that sort of thing.  Penny gets a very thorough lesson in everything that she has been hitherto missing out on.

There is a strong age-play element to this story. But there is also a lot of grown-up Dom/sub stuff as well. David and Penny draw a distinction between their age-play and their grown-up time. David actually tells Penny off at one point for using her "little voice" in the bedroom.

I wouldn't describe myself as a Little (although there is definitely a Daddy Dom dynamic in my relationship with Gentleman Friend even though we would never use the actual 'D word'.) I quite like Penny's little lifestyle though. I'm quite jealous of all the Disney stuff she has, for one thing.

Claimed by Daddy is a highly original take on the Daddy/little genre. Cuddles, spanking, sex and the multiverse Many-Worlds Interpretation of Quantum Mechanics. It's got it all!

I really, really hope that Vanessa Brooks writes a companion book to this one telling the story of the Other Penny who switches lives with our Penny at the start of the book. What does she do when she suddenly finds herself in a universe where she never met David? As Penny says to David, "I honestly believe that she would try to find you." I think so too. How do you persuade a man who has never met you that he's actually your tried-and-tested perfect Daddy Dom? Sneaky seduction or just fling yourself over his lap and be done with it? It would be great fun finding out.

Want to know more about the book review star rating system? Or find out what other books I've reviewed? Check out this page here.
Posted by Etta Stark at 17:53 No comments:

365 Dni - Why I'm OK with Dubious Consent in Romance 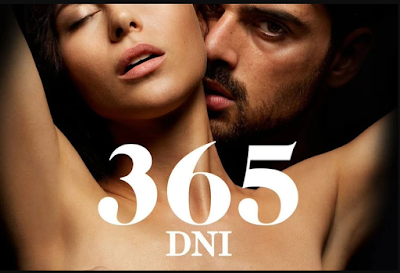 I haven't read the original book and there doesn't yet seem to be an English translation. Although I imagine that will be rectified pretty soon given the attention that it's getting. There is probably a hard-working translator turning dialogue like "Nie jestem workiem ziemniaków" into "I am not a bag of potatoes" as we speak.

I have watched the film of course. And it's, well. it's not great to be honest. It's clunky, poorly-paced and bafflingly edited. The actress who plays the heroine, Laura, Anna Maria Sieklucka, while very pretty, doesn't really have the emotional range to convey the seemingly contradictory emotions and motivations of her character.

The biggest controversy with this film is the issue of its Dubious Consent (or DubCon as it is referred to in smutty book-writing circles). And the consent portrayed in this film is about as dubious as you can get, given that the 'hero', Mafia boss, Massimo forcibly drugs and kidnaps Laura and holds her against her will telling that she has 365 days to fall in love with him.

I think we are all in agreement that abduction and imprisonment are Not OK in the real world. I believe there are actually laws against it.

There is, however, a long tradition of such things being portrayed as romantic storylines. Rudolph Valentino was always at it. Kurt Russell kidnapped Goldie Hawn in Overboard and as I recall she had a delightful time of it. Even Disney have turned their hand to Stockholm Syndrome romance. Twice.

Near the beginning of the film Massimo tells Laura "I will never touch you without your consent." The thing is he keeps touching her. Every five minutes the bloke is slamming her up against a wall, licking her neck or threatening to frig her off on a private plane.

I think what he actually means is "I won't stick my penis inside you without your consent" and to be fair to him, he doesn't actually do that until he has Laura's enthusiastic say-so. So I suppose he is almost a gentleman in that regard. He probably should have been a clearer about his intentions though.

I am a feminist and a sexual submissive and sometimes that it is a troublesome line to straddle. But while I am absolutely adamant about Informed Consent in real life, in fiction (and in my own personal daydreams), I am happy for those lines to be blurred.

I think we need to be grown-up enough to recognise that women are allowed to have fantasies like these. It doesn't make us idiots or doormats or apologists for the Rough Sex Murder Defence.

It means we're a bit kinky, obviously. But, hey, if you're following this blog, then you probably already knew that about yourself. 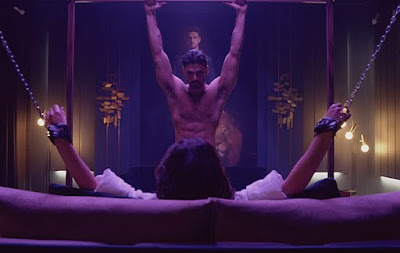 The film is oddly named because it doesn't take Massimo anything like the 365 days to meet his target. Laura - Spoiler! - declares her love for him around week 8, I think. Despite the unpromising committing-a-serious-felony sort of start of their relationship, she is won over by the tattooed mumbly mafia guy who has asked her to teach him how to be gentle. I presume there will be more to follow given that the film ends of a cliffhanger that makes Fifty Shades of Grey's breakup scene look half-hearted by comparison.

Neflix, if you're reading, please note that that's definitely something that I want to see more of.

In fact, Netflix, if you're looking to commission a whole bunch of new kinky romance stories, you might want to check out a blog post I wrote a few years ago about spanky romance books that I really wanted to see onscreen. I even took care of the casting so, quite frankly, I have done all the work for you there. Or, if you like, you could turn one of my books into a film. I'm sure it would upset just as many people on Twitter as 365 Dni did.