You're never too old to learn new things about condoms

The other day, my daughter decided to inflate a condom like a balloon. I've no idea why she did this. She's nineteen. I am sure that she knows how condoms are supposed to be employed.

We were both feeling poorly and full of cold viruses and were lounging around the living room feeling sorry for ourselves. Clearly condom-inflation seemed the way to go at this point. Just before she buggered off to her boyfriend's house for the evening, my daughter drew a face on the inflated condom "so you don't get lonely".

So I now have a new room-mate. He's a bit of an airhead but on the whole he's pretty easy going. 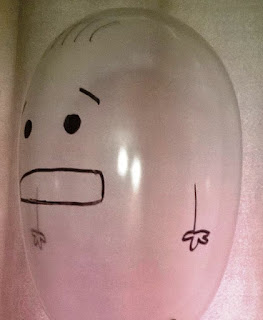 My new friend was originally quite, well, slimy. He's considerably less so now. I mentioned to my daughter that this was because he has been bobbing around my bedroom rubbing spermicide on every surface that he has come into contact with, This led to a slightly heated "Do condoms come with added spermicide?" discussion. I maintained that they do. My daughter emphatically maintained that the condom-puppet's sliminess was all down to lubricant. "It's just lube, Mum!" is the sort of thing that passes for normal conversation in our house.

I backed down from the argument pretty quickly because (a) my knowledge of the ins and outs of prophylactics isn't terribly comprehensive and (b) I had to concede that if spermicide was part of the manufacturing process of a condom, would one really put it on the outside? Surely if you were going to spermicidize any part of a condom, it would make a lot more sense to put it on the inside.

I like to recognise a learning opportunity when I see one, though. So if anyone is curious (and as ill-informed as I am), I have ascertained that condoms DID used to include spermicide Nonoxynol-9 up until the early part of this century. They don't any more. Durex have completely stopped making and selling condoms lubricated with spermicide. Nonoxynol-9 is no longer permitted in new products. In 2001 the World Health Organisation concluded: "There is no published scientific evidence that N-9-lubricated condoms provide any additional protection against pregnancy or STDs compared with condoms lubricated with other products. Since adverse effects due to the addition of N-9 to condoms cannot be excluded, such condoms should no longer be promoted."

So there you go. I wasn't wrong exactly. Just hopelessly out of date. That's parents for you - always living in the past. No wonder our teenage children roll their eyes and say "It's just lube, Mum." God, parents are so embarrassing. Always carrying on like it's the 1990s or something.

Oh, and speaking of the 1990s, we had some corking condom-awareness adverts back then. I am sure anyone from the UK who is near my age will remember Fred Brewster and 'Geronimo'. It's sad to think that Mr Brewster is almost certainly no longer with us, I hope he bequeathed Geronimo to a good home.

"It was like having a bath with your socks on. But it never stopped me. No way."

Email ThisBlogThis!Share to TwitterShare to FacebookShare to Pinterest
Labels: "It was like having a bath with your socks on", About Me, condoms, sperm, spermicide