This is my 'C' post for the Spanking A-Z Blog Challenge. "What's that?" you ask. Check out my page here for more information and a list of all the wonderful bloggers taking part.

In the spirit of intrepid investigation I decided to go and buy a bunch of these magazines and then review them for you here. Because that's the kind of service I offer to my EttaStark.com readership.

First of all, I had to go and buy the things. There was a slight feeling of trepidation in doing so. In referring to these mags as "top shelf", you have to appreciate that they are exactly that. There are three shelves of "Woman's Own" and "TV Quick" and "Cosmopolitan" and the like below the above-eye-level display of suggestive ladies and their breasts. I knew I didn't want to grab a bunch of magazines at random and was going to need to do a certain amount of perusing in order to make my selection. I didn't want to be doing that while small children were checking out CBeebies or Sofia The First magazines on the bottom shelf.

So I skulked about a bit until all under-eighteens had left the premises and then made my selection. I favoured the kinkier titles in my purchases because - well, have you met me? But I also included a couple of more vanilla titles by way of a control.

The magazines I purchased were as follows:

So here you go, below are my reviews of five actual paper-based pornographic publications that I purchased with my bare hands from the little shop down the road.

I started with this one because it looks like one of the most mainstream among my purchases. Along with Playboy naturally. But Fiesta doesn't have any of Playboy's pretensions of classiness. It's very much a tabloid sort of publication.

This particular edition came with a FREE '3 hour full-length sex DVD'. I haven't watched it.

The Unique Selling Point of Readers' Wives is that the reader (viewer?) gets the chance to appreciate ordinary-looking non-model types displaying their vaginas for the camera. I am not sure how far we can take Fiesta's word for the non-professional status of their models. Certainly Jodie from Cleethorpes seems to spend most of her photo session with an expression of "Have you taken the picture now or what?" which is instantly recognisable to any of us who hate having our photos taken.

I did appreciate the variety of body sizes included in the photo shoots. Jo from Cirencester is a big lady. She and I are probably the same dress size. Like Jo, I could turn one of my bras into a couple of hats without too much alteration. While I don't think that Fiesta are necessary leading the way in Women's Rights, it's nice to see a plus-size lady being paid a hundred quid for flashing her tits and minge for the camera.

What surprised me most about reading this magazine was, well, how magazine-y it was. I expected to it be wall-to-wall pictures of ladies displaying their vaginas. And while there was a lot of that sort of thing, the publishers also clearly felt obliged to include a bunch of other stuff.

Aside from 'Readers' Confessions' (apparently "All True!" though how Fiesta might go about determining that is a bit mind-boggling), there are letters pages, an agony aunt column, jokes, quizzes and even a word search puzzle. Seriously. It's like Take a Break but with more minge shots.

Taboo (not to be confused with the alcopop of the same name) is an altogether kinkier affair than Fiesta.

I found myself a little underwhelmed by the content though. It ought to have been right up my alley, being stuffed full of photos of women being spanked and tortured and tied up with ropes and stuff. Actually, there's a lot of rope. It turns up in almost every almost every photoshoot. They're clearly very fond of rope at Taboo. The cover page even promises "Shibari Shooter Clover's Roped Reveries". I've perused the article that it refers to and you, know, those words still don't make any sense in that order.

Disappointingly, there's very little text between the the glossy photoshoots. And the text that you do get is all "Lexi is a pretty piece of meat who must accept her punishment" sub-par erotica. Where's my goddamn word search puzzle, eh?

The cover lady, Ariel, is a model for the website Restrained Elegance and talks about how she got into bondage modelling. (By bribing the photographer with cake, apparently.) 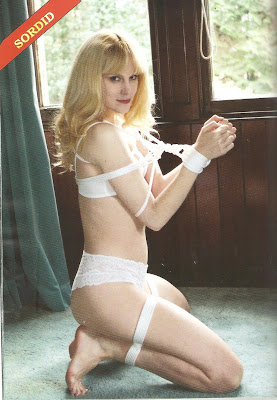 This was the first of the magazines so far to depict proper erect penises. Actual penises going into actual orifices no less. I don't find that sort of thing terribly exciting. Penises in real life are grand, don't get me wrong. But pictures of people having sex? Meh.

What I find most surprising about both Taboo and Sordid is how absolutely filthily kinky they are for something that was easily available in my local corner shop. There was I thinking I was part of some exclusive group of perverts, that we were a small minority that most vanilla people wouldn't understand. When all the time there was clearly enough of a demand for this sort of stuff that it makes financial sense for small retailers to stock it in shops which primarily sell booze and snack foods and household items that people might run out of and need to buy in a hurry. I imagine that up and down the country, people are saying to their partners "We've run out of milk, can you nip to the shops and pick some up? Oh, and some toilet paper. And a magazine depicting a woman tied up with rope getting her arse caned? Thanks!"

This actually looked from its cover like it might be the kinkiest of the lot, featuring as it did a scary-looking woman in latex and a surgical face mask.

That was a bit misleading though. The cover lady was an example of an artwork by photographer and artist Mia Tyler. Forum, it turns out, is as vanilla as they come.

Lots of penises in this one, too. In fact there are a lot of very close-up pictures of penises being inserted into orifices. Is that sexy?  It seems a bit impersonal. I'd prefer to have a bit more context. I want to see the lady and gentlemen concerned enjoying themselves. Not to mention a chance to check out the home furnishings.

Well, actually I require a lot more context from my mastubatory aids. I need well-drawn characters and an interesting and coherent narrative arc. I suspect that these magazines aren't really aimed at me at all.

There is a photoshoot of office workers, Lexi and Vanessa, which starts off looking exactly like a Jackie photo story. I wish there were speech bubbles I would love to know what was being discussed in these first couple of panels that led to lots of naked oral sex a few panels later.

You know when people say "I only buy Playboy for the articles", well it turns out that non-sexy articles in Playboy are totally a thing. This edition had an interview with Mike Tyson, an article on cars, twenty questions with some comedian called Nick Kroll and book reviews of totally legit non-porny books. I didn't read any of them. I didn't buy Playboy for the articles. I bought it for the naked pictures.

And Playboy are terribly good at the naked pictures side of things. I know I praised Fiesta earlier on for including lots of realistic-looking women in their photoshoots but there is something to be said for looking at pictures of astonishingly beautiful women. Playboy models are terribly aesthetically pleasing, you know.

Although there was one photo which profoundly shocked me and went against all sense of decency and propriety regarding things that are acceptable to depict in a magazine.


So there you go. Five reviews of five pornographic magazines. I'm not sure what I have learnt from this experience apart from the fact that you can get some surprisingly filthy pornographic material in little local convenience stores just outside of Guildford.


* I  am, just to be clear, not actually going to do that. Thought I should clarify that in case someone felt the need to report me to someone. I imagine that sort of behaviour would be be rather more frowned on these days than it was in the 1980s.