*This isn't really going to be an ongoing series. Don't worry.

You know, even two years ago, I wouldn't have have guessed that at some point in the future, I'd be sharing my favourite teenage masturbatory literature with the whole of the world wide web. Yet these days, it seems positively normal behaviour. Talk about the most wanked-over book on my teenage bookshelf? Sure, that's a thing I would totally do. In fact, I'm doing it right now.

(Although before we continue, please rid yourself of any mental images that "wanked over" may have conjured up. I didn't mean it literally. I am a lady and therefore tidy and discreet.)

Obviously not everything included in the book was a turn-on. In fact most of it wasn't. But you know it was the 1990s and I was grateful for whatever I could get. Even the stuff that it seemed like it should be my kind of thing (and we all know that my kind of thing generally involves spanking, yes?) didn't always read the way I wanted it to. The extract from Miss Coote's Confession gets off to a promising start when a young woman with a tendency towards thievery is being discussed: "Have they never tried a good whipping?" Miss Cootes asks regarding the girl's parents. She then goes on to offer to cure the girl as long as she is given carte blanche to punish the girl in her own way. 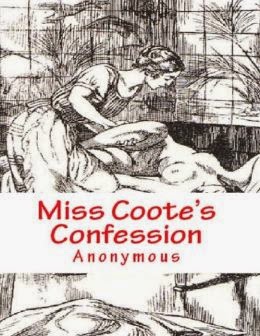 Her own way being a sound thrashing of course. So by and by, the girl is invited over, gets caught red-handed an finds herself stretched out with "her chemise rolled up" awaiting chastisement. I was very fond of this extract for the most part. Ideally I prefer a gentleman to administering the punishment rather than a lady but that's a minor complaint. There's a page or so of the actual punishment which I re-read on many occasions. "You bad girl. Your bottom shall be marked for many a day. I'll wager you don't steal as long as the marks remain."

Problem is the author (the prolific "Anon") blows it in the last few paragraphs when she says "All the spectators are greatly moved and seem to enjoy the sight of Selina's blood dripping down, down till her stockings are saturated and it forms little pools beneath her on the floor."

Ah, right. Blood. Yeah, that's not sexy. I prefer my damn good thrashings to be administered without blood loss, thank you very much. Still, I worked round it. On subsequent occasions, I just remembered to stop reading before I got to that bit.

Another favourite of mine in this anthology was an extract from Jean de Berg's The Image (1956) in which the narrator looks at some photographs of young woman to whom he has been previously introduced called Anne.


The buttocks are marked in every direction by deep lines, very clear and distinct, which crisscross the central crack, more or less stressed according to how hard the whip fell.

This picture of little Anne chained to her bed, on her knees in a most uncomfortable position, is obviously more moving because of the cruel evidence of the torture she has undergone. The black ironwork forms a pattern of elegant arabesques behind her.

My favourite inclusion in the Anthology, wasn't even a work of a literary prose. Rather it was a letter written in 1785 by an anonymous correspondent to the editor of The Exhibition of Female Flagellants offering helpful advice to the engraver on how best to illustrate women having their backsides thrashed. It is clearly a matter in which he had a deep and resounding interest. "To see the representation of an agreeable young lady having her petticoats pulled up and her pretty pouting backside laid bare and seeming to feel the tingling stripes of a Rod is amusing enough." He recommends that the arses depicted should be "round, plump and large, rather over than under the size which the usual proportions of painters and statuaries would allow." Quite right too. 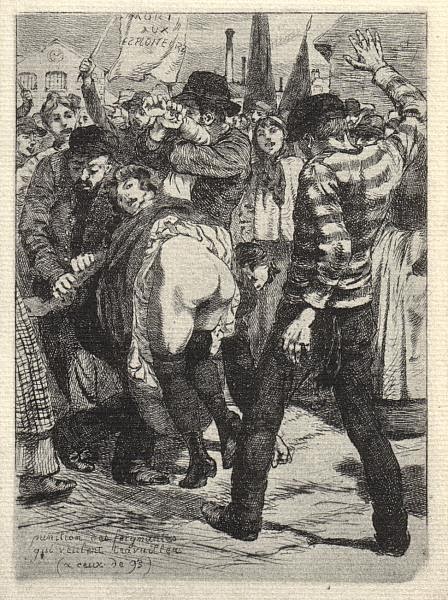 It was a hugely nostalgic experience reading through this anthology again after several decades. I couldn't find my original copy - I suspect it's up in my parents' loft somewhere so had ordered a replacement from Amazon which is happily exactly the same edition as my original. Everything - from the cover to the layout to the size of the thing (just slightly too large and heavy to comfortably hold in one hand, in case you're wondering) takes me right back to those furtive teenage fumblings. Proust had memories evoked by the taste of a madeleine dipped in tea. I, however, have eighteenth century perverts talking about arses.

If only I could go back and show teenage me what delights were awaiting me in the twenty-first century.That rather than having to trawl through books to find snatches of things that kinda sorta fitted my fantasies, there would be hundreds of books available containing just the sort of thoroughly stern and frequently romantic spankings that I wanted to read about. Just the Victorian and Regency section of the Blushing Books website would have been more than I could have wished for. If I had known back then, the range and variety of filth that would be accessible to middle-aged me, it would have blown my kinky, conflicted, horny little adolescent mind.