Saturday Spanks - 'That was beyond kinky, surely.'

My snippet this week comes from my story The Perfect Housewife which is part of the Corbin's Bend Love In The Rockies collection.

Kirsty has chosen to make her boyfriend Logan's Valentine's Day extra special by dressing up as a sexy, submissive 1950's housewife. Logan is enjoying the game immensely. 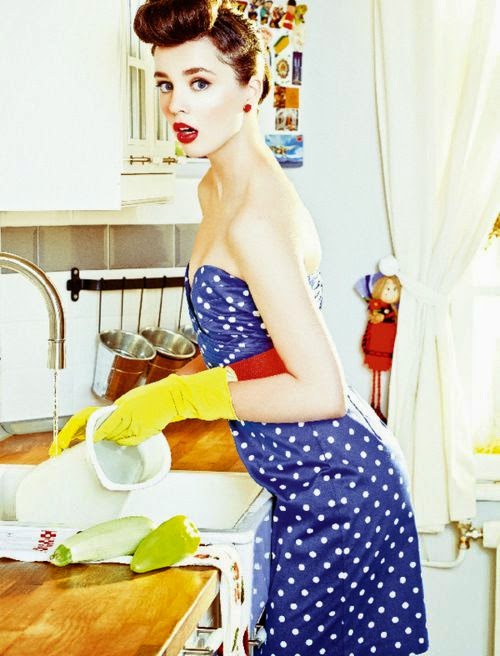 Logan stayed stretched back in his chair and watched her make the coffee. When she handed him his cup he nodded to the pile of dirty crockery and cutlery by the kitchen sink. “Go on then,” he said. “Get on with it.”

“You want to watch me do the washing up?”

“I was going to stack it all in the dishwasher in the morning.”

Kirsty stared. Did he really mean to say that his housewife fantasy consisted of her doing actual housework? That was beyond kinky, surely.

Still, she shrugged inwardly, tonight was all about fulfilling his fantasies. If he wanted to 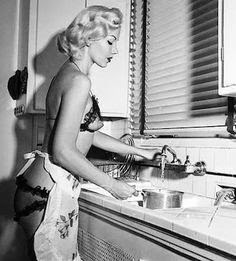 watch her scrub a bunch of dirty dishes then so be it. She moved towards the sink.

“Do you have an apron to put on?” asked Logan.

“Drat, no,” said Kirsty, crestfallen. Why hadn’t she bought a frilly apron? It would have finished off her 1950s housewife look perfectly. She felt quite annoyed at herself.

Logan didn’t seem to mind.  “No matter,” he said, walking towards her. “It would be a shame if you got your pretty dress all wet, though.” He made a twirling motion with his fingers indicating that she should turn round. Kirsty complied and he unzipped her dress at the back then pulled it down her body, supporting Kirsty as she stepped out of it. Folding the dress over his arm he looked her up and down and smiled.

Make sure you go and check out Love In The Rockies, if you haven't already. It has some wonderful stories by some wonderful authors including the always awesome Thianna D and Constance Masters.

Six blazing good stories about Six of our favorite couples. What happens in Corbin's Bend during the most loving of all holidays?
Valentine's Surprise by Constance Masters
Erin and Zach have had a busy but happy year. Her loving husband has promised her an amazing Valentine’s Day weekend. Will the surprise be the best she's ever gotten? Or will this particular white elephant gift go down as the worst Valentine's Day gift in the history of bad gifts?
Roy & Teri's Staycation by Kate Richards
Roy and Teri Simms are finally going to take their vacation and renew their romance! With their adopted son Ben safely stowed with neighbors for a week, they are taking a romantic cruise to the Caribbean and this time Teri is on board with the plan. But one thing after another happens to keep them from leaving town. Will they still be able to find any time to try out all the new toys? Or will the constant interruptions result in spanking interruptus?
Past Interference by Kathryn R. Blake
When Jerry Douglas asks Elly Benson to marry him, he wants their ceremony to be as close to Valentine's Day as possible. Though Elly tearfully accepts Jerry's proposal without hesitation, as she readies herself for her second wedding, the doubts and misgivings of any new bride-to-be are exacerbated by the abuse she suffered during her first marriage. Though she's lived with Jerry for four months now, and been subject to his discipline more than once, her first husband had been kind and careful with her, too, in the beginning. At least until she vowed to love, honor and obey him. Will they get to their I-dos, or will Elly’s past interfere just when things are going good?
The Perfect Housewife by Etta Stark
Kirsty Beale may be less wild and destructive than she used to be but she's still a long way off from being the perfect housewife. Since moving in with her boyfriend Logan - and spending time with Logan's very traditional family - Kirsty has begun to worry that she isn't the traditional homemaker that Logan would like her to be. Will Valentine’s Day be the perfect opportunity to let Logan enjoy the pleasures of having a perfect old-fashioned wife - if only for one night?
Unexpected Surprises by Ruth Staunton
For their first Valentine's Day in Corbin's Bend, Grant Taylor is determined to do something special for his wife Lainie. Lainie, however, has plans of her own. When Grant insists she cut back on her heavy load, she agrees under protest. But when the time comes to fulfill that agreement, she changes her mind and decides Grant is being unreasonable. She determines to chaperone the dance anyway and deal with Grant later. Unfortunately, Lainie's plan doesn't work out quite like she intended it to and she is in for quite a few unexpected surprises.
Knowing What She Needs by Thianna D.
While Charmagne Kendle loves Brent Carmichael to pieces, his innate need to help others is a thorn in her side. Especially on Valentine’s Day. When she wakes up to find him gone, it puts her in a really bad mood, one that just gets darker by the hour. Once Brent calms her down with a spanking and a night of passionate lovemaking, he gives her the best gift she ever could have received. Just when things get on an even keel again, help is needed from the man she loves. Char has a choice to make: Accept it willingly. Or Detonate. One decision controls their future. Will she make the right one this Valentine’s Day?

Check out all the other Saturday Spankers! And have wonderful, wonderful weekends, each and every one of you.