A is for Authenticity

This post is part of the Spanking A-Z Blog Challenge. What's that I hear you ask? Check out my page here for more information.

I write historical fiction. So far everything I have written or am in the process of writing has been set during the reign of Queen Victoria. It’s a period of history that has always fascinated me. I think because I consider it the most recent point of history that was still properly ‘Olden Times’. The clothes, the technology are all so far removed from our own and yet they were just teetering on the brink of it. Mere decades away from flappers showing off their knees with total abandon.

Of course, writing historical fiction requires a fair bit of research. You might feel inspired writing about your ruff-wearing Victorian computer programmer and his love of hunting woolly mammoths but you are going to feel pretty silly once the reviews come in.

How much historical authenticity is required when writing fiction? One of the reasons I prefer historical settings in the spanking fiction that I both read and write, is the opportunities for women to be spanked without their consent without the implications that this would raise in a modern day setting.  There’s something delightful in reading a spanking scene which is played entirely for disciplinary purposes even if the ultimate motivation is to turn the readers on. 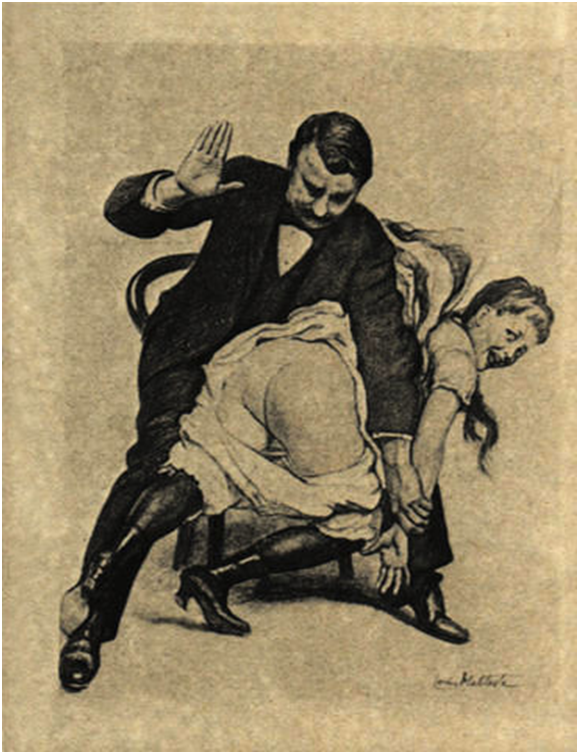 It’s difficult to gauge exactly how much spanking went on at the end of the nineteenth century. Clearly, it wasn’t something that most people would have talked about or mentioned in letters.  The Englishwoman’s Domestic Magazine (edited by the husband of household management guru, Mrs Beeton ) famously had an ongoing correspondence in its letters page regarding the advisability and methods of correcting adult women. How much of this reflects the disciplinary protocols of the time and how much were the imaginative fantasies of Victorian spankos, it’s hard to tell. Though there was definitely quite of a lot of the latter.

But that’s fine. If I’m reading spanking fiction, I want everybody to get spanked and everybody to consider it normal. That’s what I’m there for. In April Hill’s brilliant book “A Glitch in Time”,  the time travelling heroine gets spanked by King Arthur,  Wild Bill Hickock, a seventeenth century pirate and a Roman gladiator. And if that isn’t the way things would have panned out, then I don’t want to hear about it.

One of the aspects of authenticity in historical fiction to consider is that of language. There needs to be a balance struck here. I am not going to write my books as though they would have been written at the time. I am writing for modern audiences. Admittedly it would be fairly easy to understand something written in the style in a late 19th century novel. The job’s harder for people setting their stories further back in history.  Anyone writing a book set in the 14th century would need to write like Chaucer.  “He priketh harde and depe” might be more authentic but would probably be harder to masturbate to.

On the other hand, if you make your characters sound too modern, you’ll going to kill the mood entirely. Lady Poshington can’t very well sweep into the drawing room exclaiming “OMG! The Fotherington ball was, like, well awesome, y’know?”

My plan is usually to write down however the characters speak in my head and hope that there aren’t too many glaring errors. I think my only hard and fast rule is “Don’t use the word ‘OK’”

As you may have guessed, I’m not going to make too many claims for the authenticity of my books. I hope they sound reasonable authentic for the time in which they are set but I am not doing the levels of research that Hilary Mantel put into Wolf Hall.

There’s a  TV series called ‘The Tudors’ about the reign of Henry VIII. I think the writers have cheerfully decided that, short of allowing their characters to carry around iPhones, anything goes. Historians complained about Henry VIII wearing costumes from the later Elizabethan era and travelling around in Victorian carriages.
Interestingly leading historian Dr Tracy Borden’s had this to say about it: "I was determined to loathe the series, with its unfeasibly beautiful actors, dodgy costumes and improbable storylines, but found myself becoming strangely addicted. The scriptwriters may have taken liberties with the facts, but they have also succeeded in re-creating the drama and atmosphere of Henry VIII's court, with its intrigues, scandals and betrayals."

Which demonstrates that maybe it’s OK to overlook a few historical details, if your story’s good enough.

Want more? Check out the other spanking bloggers participating in the blogging challenge. The Linky List is here.

Email ThisBlogThis!Share to TwitterShare to FacebookShare to Pinterest
Labels: #spankA2Z, History, Spanking A to Z, Writing